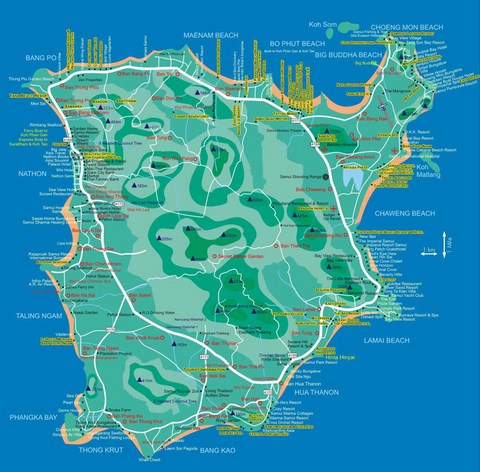 Koh Samui is an island in the Gulf of Thailand which is part of the province of Suratthani. Located about 25 km from the coast, to +/-1 hour flight from Bangkok, it measures about 21 kilometres about 25 kilometres.
A peripheral 55 kilometers, largely coastal road, encircles the island.
She is green, planted more than 4 million coconut trees, and bordered by white sand beaches.
Koh samui has been a fairly late development. Until the arrival of the first tourists around 1980, she never was populated by fishermen from China and owned only dirt roads.
Gorgeous beaches have attracted more and more tourists, initially hippie style, at the time where the links with the Mainland were by boat. The construction of an airport in the 1990s has increased the number of arrivals, multiplied the possibilities for housing and the quality of the accommodation increased considerably.

The most beautiful beaches of Samui extend over the East Coast, the most popular being Chaweng and Lamai, where one can find a lot of shops and restaurants. Bo Phut and Mae Nam (to the North) are other popular beaches. Apart from the beaches, the other attractions of the island are the waterfalls of Hin Lat and Na Mueang; the phallic rock formations of the southern end of Lamai; the garden of butterflies, the aquarium and the zoo to the Tigers, the farm crocodiles; a huge image of the seated Buddha (Big Buddha) in the Northeast; a training centre for the picking of the coconut by monkeys; NATHON West, which includes the administration and where the main port of Samui; fighting buffaloes; the snake farm; at the center of the island aloft, magnificent point of view, the 'magic garden' with a small waterfall and all around dozens of statuettes that have been sculpted in stone by a local resident. etc...

Climate: tropical, hot all year round.
December to March is the best season to visit koh Samui, the temperatures are not too high (30 ° C anyway), nights are cooler. A few tropical showers may fall in December.  From April to may are the hottest months, the falling rain rarely. From June to September, time is a little less hot and sometimes interspersed with some rain. October and November are the wettest months, even if it does not rain every day. 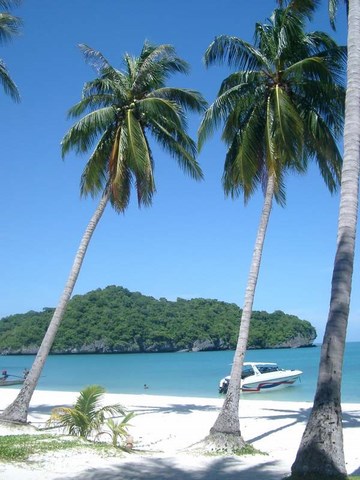 Be it by boat, speed boat, Jeep 4 x 4 or in air-conditioned car, we can easily discover nearby islands, rides on the back of elephants, the waterfalls, the show of monkeys, Tigers, snakes, etc, visits to temples, Big Buddha and much more...
You can also enjoy the benefits of Thai traditional massage, which can be played directly on the beach, facing the sea, or in many island massage parlors.
A few examples:
-Day of discovery of the island
-An elephant walk
-Day Tour of the island by boat
-Grandfather and grandmother rocks
-Big Buddha
-Magic garden
-Mummified monk
-Theatre of the apes
-Crocodile Farm
-Butterfly farm
-Snake farm
-Zoo of koh samui
-Waterfalls
-Discover Koh phangan by boat
-Ang Thong national park
-Snorkeling at koh Tao
-Private boat rental
-Day sea fishing
-Thai Boxing
-Discos
-Cabarets